Jim Marmino (aka Vincenzo Francesco, named after two grandfathers) was a long-time volunteer at the Davedi Club. He had a passionate and abiding interest in Italian culture, in history, sport and adding benefit to his community.

Jim’s parents immigrated from Reggio Calabria and settled in the east end of North Bay. Jim joked that growing up with 5 sisters made it inevitable that he would become a boxer. He started a boxing club in the basement of the Marmino house where struggling youth could work out in the gentlemen’s sport. Later Jim worked for several years as boxing instructor at the Knights of Columbus Camp run by Father Brian McKee.

Jim studied history and liberal arts. He taught in Ottawa and memorably created a centennial project documentary which was distributed to schools across Canada. He was a history teacher at West Ferris Secondary School in North Bay for many years.

In addition to receiving a YMCA Peace award for his volunteerism, Jim was the proud recipient of Queen Elizabeth 11 Diamond Jubilee medal and had the opportunity to meet Queen Elizabeth in 2012.

Jim always worked in cooperation with other people. Jim started his involvement with the Davedi Club as president of the Dante Alighieri Society in the 1970s, raising bursaries for students to study the arts. He was one of the founders of the Davedi Order of Merit and worked to honour over 50 people for volunteerism. He was a quietly inspiring mentor to other volunteers. 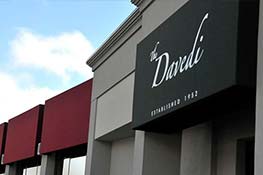 The Davedi Club was founded in 1952 by many Italian Immigrants whose names are still prominent in North Bay today. Learn More